An African Batman with a foot fetish, Stalin playing chess against himself, a ninja named Spaghetti, a xiaolin monk charged with the task of protecting the Ark of the Covenant, giant flies that shoot killer laser beams, a drag queen paratrooper, and a Joe Ramone look-alike who might just be Jesus are some of the things you will see in this acid trip disguised as a movie called Jesus Shows You The Way To The Highway.

Written and directed by Spanish filmmaker, Miguel Llansó, this Estonian-Ethiopian-Lithuanian-Romanian-Spanish production doesn’t have a drop of normal running through its veins. Not since Léo Carax ‘s Holy Motors had I encountered a cinematic experience as the one I’ve had with this bizarre Frankenstein made up with parts retrieved from Film graveyard. And by that I mean the sheer joy and awe of watching a film where the anchor of logic is lifted and one sails off into the unknown where truly anything can happen. 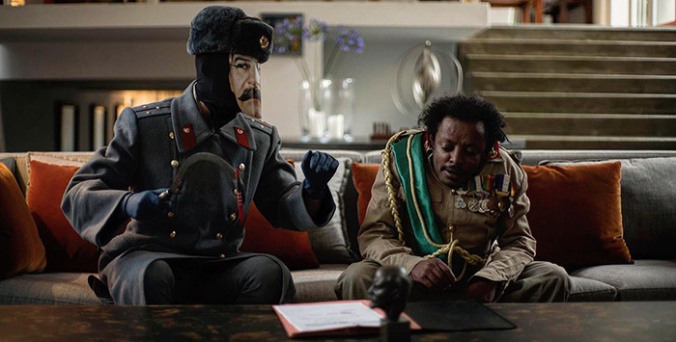 The plot – for lack of a better term – follows CIA special agent DT Gagano (Daniel Tadesse) on his last and most daunting mission: eliminating the Soviet Union virus infecting program Psychobook. Along with his partner, agent Palmer Eldritch(Agustín Mateo), Gagano goes into this virtual reality universe and is sadly trapped, his conscience is transferred to Beta-Ethiopia, and in the meantime, in the physical world he enters a state of coma. From this moment on, Gagano will do everything he can to complete his mission, escape the simulation, recover his body, rejoin his wife, Malin (the Baltic amazon Gerda-Annette Alikas), and finally retire to fulfil Malin’s dream of having her own boxing gym, and his own dream of owning a pizza parlour by the beach.

The film’s aesthetic matches its story in craziness. Taking its cues from the B movie canon: 007 rip-offs, Filipino exploitation cinema, Turkish mockbusters and other genre atrocities, Jesus… is generous in ultra cheap special effects, jarring cuts, uber vintage camera movements and angles, and a ton of transitions; all accompanied by hard bop experimental jazz and high-pitched video game music. Isn’t that enough? Ok: all the voices (parodying Italian films from the 70s) are recorded in studio, not in situ, and the pairing is deliberately bad. Still want more? Alright: the scenes corresponding to Gagano and Eldritch’s mission in Psychobook (during which, by the way, they’re wearing Robert Redford and Richard Pryor paper-masks, respectively) are in stop-motion – not stop-motion with puppets, stop-motion with humans.

Miguel Llansó is the first to make fun of his work. When asked what he wanted to explore in his second feature length film, he said he wanted to include kung-fu. When introducing Jesus… in Tallinn, he used the adjective “stupid” on at least five occasions. And though this will to not take itself so seriously is fundamental to save the movie from sinking under the weight of its pretentious ambitions, Llansó also knows that what he’s made is no joke, that it  has a lot to say and that it might actually be really good.

Because though Jesus Shows You The Way to The Highway makes no sense, its lack of logic is – like that of Dada or the theatre of the absurd – infused with meaning and that meaning is corrosive. The laughter it provokes speaks volumes about how entertainment (in its most Horkheimer-Adorno sense) and new media are intermingled with the authoritarian populist regimes taking over left and right (left and right used both literally and politically). It’s no coincidence that the villains in this movie are constantly changing masks: Stalin, Margaret Thatcher, George Bush, etc., but the face beneath is always that of a cat, the almighty deity of viral content.

It comes as no surprise, then, that Llansó pinpoints Philip K. Dick as his main source of inspiration. Dick, that paranoid addicted to hallucinogens and amphetamines who predicted the future better than anyone. Just like Dick, Llansó is interested in how pop culture, and even garbage, reflects our context much better than “high culture”; and also like Dick, Llansó is sceptical about utopias and dystopias, and rather focuses on entropy. In Jesus… we witness the entropy of globalisation as experienced in the margins – and by reverberation in the centre -: technological waste, a grotesque cybernetic cemetery coming to life, a deranged carnival of alienation where we laugh just to keep from crying.

Jesus Shows You The Way to The Highway is destined to become a cult film, a bonfire around which the feverish cinephiles of the underground will gather. I hope, however, that in the process of cultification, it won’t lose its radical vein, its dark destructive power.